Too good to be true? It probably is.

When a homeowner gets a letter from a supply house explaining that they were never paid for the new roof materials that went on from a contractor who gave a great price, homeowners start to panic.

Due diligence should have told them that the cheap price was too good to be true.  Rather than listen to that little voice in all of our heads warning them, they went with the cheap guy and now they’re faced with having a lien slapped on their house and knowing they’ll never be able to sell or get a loan until that lien is satisfied. 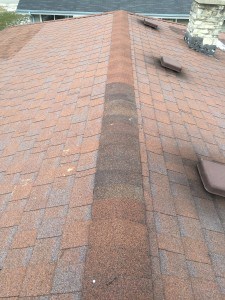 This contractor got a deal of shingles and saved this customer some money, but in the end, they now have a roof with 3 colors on it.  The contractor only promised them a brown roof, which is what they got.

I get a call several times a year from panicked homeowners asking me what can be done.  Sometimes they’ve asked me for advice and if they seemed to be a good person who just got stuck in a bad situation, I offer my advice and sometimes that advice is simply to get an attorney.

You see there are certain fixed costs that a contractor runs into and certain things that he just can’t cut corners on if he wants to make a profit.  He has the cost of materials, dumpster services, labor, insurance, any marketing he’s invested in, an aerial surveys that have been done on the property, advertising and others.

But what some people don’t realize is that many of these costs are put on his account until after he pays it.

In the last two years alone I’ve heard of roofers who have made business-killing choices that have cost the homeowner.  One of them built up a $60,000 bill at his supplier before they cut him off and went after his customers by putting liens on their homes.  A 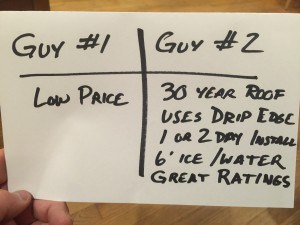 It’s tough to assess differences but if you’re buying exclusively on price, you get what you pay for.

nother used his fathers account to charge the roofing supplies and over a month charged up a $25,000 bill, all the time patting himself on the back.

Both of these contractors are out of business today.  Both have black marks on their Better Business Bureau profile and a lot of people who decided to go with the cheap guy have liens on the homes.

Sometimes these calls come after customers have signed a contract with me and given me a downpayment.  Then they had a contractor come by their home and give them a price that was as much as 30% less than me and immediately they have buyers remorse.

Every year I hire summer help and every year I bring them to a job site on about 51st and Grange.  That customer had a contract where we completely redesigned their gutter flow when they called me to tell me they were cancelling the next day because that morning a contractor came by to say he could do their gutters for half the price but only if he could get started the same day.  They agreed and in doing so, gave me an opportunity to teach my summer interns about the worst possible hatchet job that customers can get subjected to.

It’s an annual field trip for my new guys.  We walk up the driveway and I point out the corners that leak like a sieve.  I point out the downspouts that on the surface look similar to mine but have inputs that are only 1″ x 2″ despite the tinfoil thick downspouts which makes it appear that they can accommodate water that is 3 times the volume.  I point out the way the contractor moved water from the upper roof to the lower roof in more of a chute technique that any others.

When my customer handed them my contract and asked if he could duplicate it, he did to the best of his skills and understanding.  No, he’s not in business anymore, but that house will have those gutters on them until the next owner because the current owner is not going to admit that they were wrong and they sure aren’t going to pay to replace their new gutters even if that means that they have to have the same leaky gutters for the next decade.

So was that job a loss for us?  It was absolutely not a loss for me or my company.   It created a teaching opportunity that is so stark and so obvious that every one of my summer interns walks away with an understanding that if a customer wants to avoid all of the warning signs, they must accept the consequences of their own bad decisions.

So if I were to offer homeowners one piece of advice it would be to listen to your instincts and if you don’t trust your instincts, ask for addresses of houses your contractor has done work on.  Drive by and look at them if you have any doubts in your mind whatsoever.

You’ll make a better choice because of it.